This build was one of the most fancy we’ve done.  While the fret board was left plain and elegant, the amount of zipflex purfling we used on this harp guitar topped all our other builds.   Robert Johnson contacted us to build his S-18ST dream harp guitar using some of the Walnut wood that had fallen on his garage years ago.  He decided to get one over on that tree that caused the damage by using it to build this instrument.  While this can sometimes be risky to use customers wood on a guitar, we were able to find some good amounts of fine grade walnut in the slabs he brought us.

After picking up his son in Portland he made the trek to our neck of the woods and brought us the lumber and we all got to know each other.  We discussed his appointments, string configuration and tone woods to use on his build and we were so excited to be able to meet Robert Johnson. He is of course no relation to the historical guitarist “Robert Johnson” who allegedly sold his soul to the devil, but we did laughably make the comment to him that he “sold his soul to the Tonedevil!”

He wanted this instrument to “BLING,” and no better way to do that than with pearl and abalone shell.  He really liked the zipflex purfling option and we soon ordered a bunch.  Created by luthier Kevin Ryan, Advanced Shell Technology makes Zipflex shell strips that can be inlayed more easily than hand cut shell.  It is separate segments of shell surrounded by a flexible substrate material allowing the thin strips to be bent around tight curves.

It works fantastic for purfling channels and rosettes.  But we also experimented with inlaying it around the edge of the fret board and were able to make a CNC tool path to route the channel.  The tounge of the fretboard is curved, but also is beveled which made it very difficult to route by hand, but also was tricky to program the toolpath.  Eventually after a thousand mouse clicks Dave finally got a working tool path. 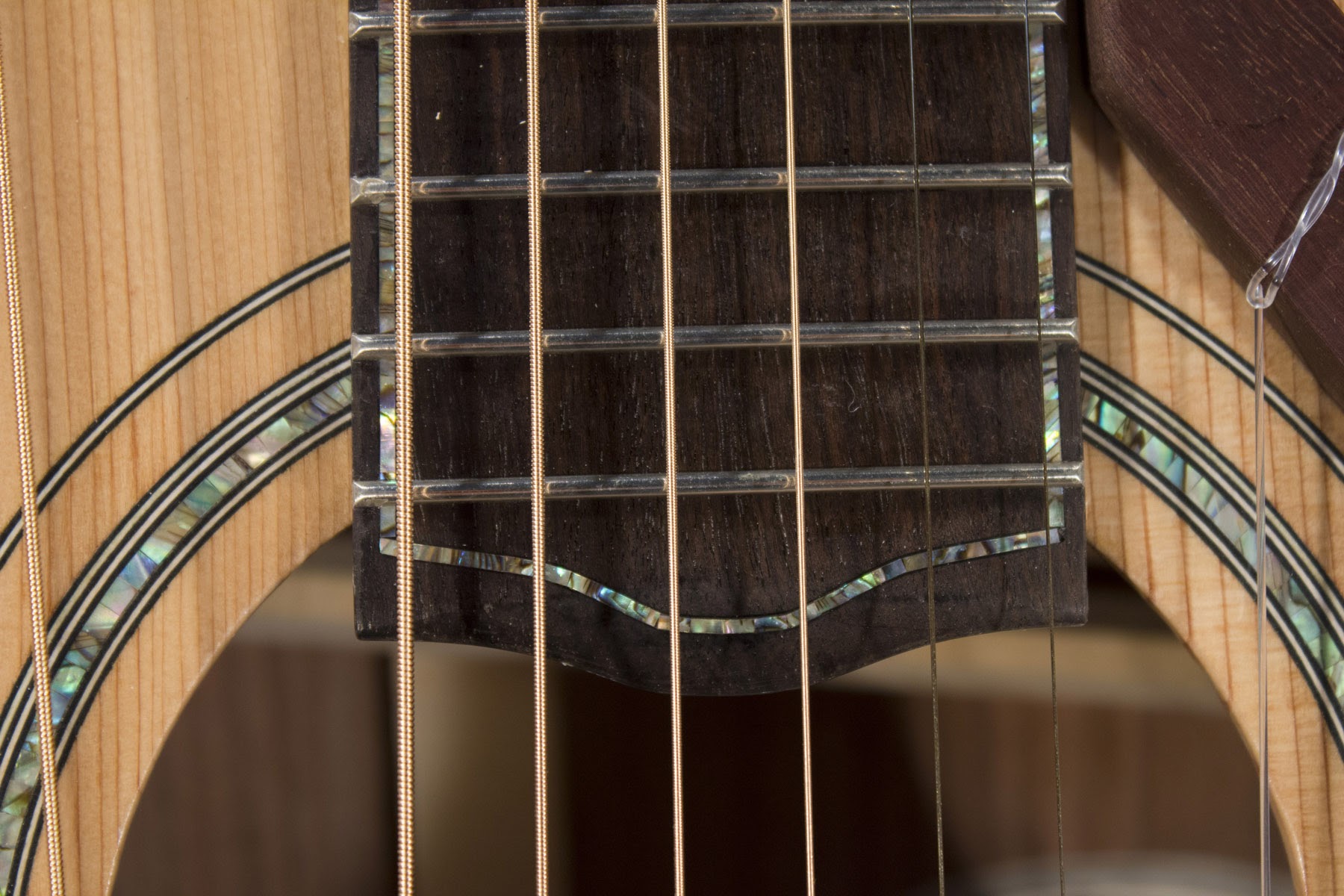 As you can see the fretboard turned out perfect.  The zipflex followed the beveled channel easily at the exact depth it was set to cut so there was very little sanding.  There was a different width we used for the rosette so that it could be inlayed with a couple pieces of our violin purfling surrounding it.

Overall the build was immaculate and sounded great too.  He opted for a western Redcedar top, and paired with his walnut, gave a very warm and rich tone that sounded pre-aged as soon as it was strung up.  This was a great combination of tone woods we will likely do again, but in the end its up to the customer to decide how they like it.   He called me just the other day to exclaim how he is still in love with his instrument and can’t keep his hands off it!  Many thanks goes to Robert for allowing us the opportunity to make his dream harp guitar a reality!  Click here to view additional photos.